(Editor’s Note: Tracy Pitcox, founder of the Heart of Texas Country Music Museum in Brady, Texas, and highly esteemed throughout the music industry, added a Jewell House collection of materials to the museum’s archives recently. Jewell now is part of the museum’s impressive array of Country music artifacts that memorialize many of her closest friends and colleagues. Pitcox’s tremendous career in radio and Country music is rooted in his native Brady and KNEL, but a critical spark was lit in Fort Worth. He talks about it all in the following story.)

Many leaders in Country music trace their careers back to a flash of insight that lit their calling and a wide-open future. 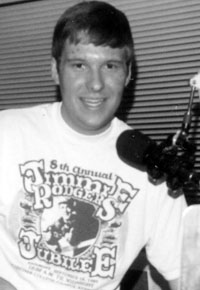 Tracy Pitcox on air at KNEL in Brady, Texas.

So it is with Tracy Pitcox, widely recognized as a powerhouse in Texas’ Country Music scene and valued friend of movers and shakers in Nashville.

He talked about his life-changing moment recently during an interview in his hometown of Brady, Texas, during the annual Heart of Texas Country Music Festival – a celebrated 9-day event that has grown out of Pitcox’s passion for traditional Country music.
That genre was as natural a part of growing up as blue jeans and biscuits, he said.
“My granddad loved Country music,” he recalled. “As a kid, I’d ride around with him in his old pickup as he listened to Stonewall Jackson, Porter Wagoner, Mel Tillis, Jimmy Rodgers, the Carter Family. My parents were huge George Jones fans. So I developed a big love of traditional Country music.”
One evening, those flames were fanned in more ways than one, he said.
“I discovered late-night AM radio – Bill Mack at WBAP in Fort Worth, Billy Parker at KVOO in Tulsa, Larry Scott at KWKH in Shreveport and Nashville stations. I could pick up those stations really well in Brady. I’d call in requests, and I got to know those (disc jockeys). I thought that was the neatest thing. I used to flip from one station to another. I didn’t want to miss anything. Every night, I’d listen to them.” 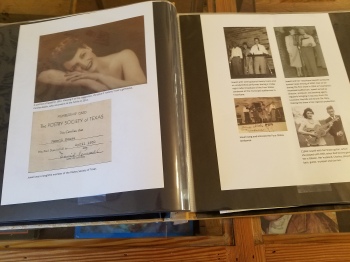 Highlights of Jewell’s career are now archived for research at the Heart of Texas Country Music Museum.

Inevitably, the DJ bug bit Pitcox. In 1986, at age 15, he wrangled a job with Brady’s KNEL, playing classic Country. “I worked the 7-10 p.m. shift every night,” he said. “Did my
And he stayed in touch with his idol, Bill Mack, calling in requests and chatting.
Meanwhile, in high school, Pitcox was heavily involved as a member of the Future Farmers of America (FFA). Working with FFA projects led him and fellow members every year to the huge stock show and rodeo in Fort Worth a.k.a. Cowtown.
One year on one such trip, Pitcox called Bill Mack around midnight from the hotel where FFA students had checked in. “He said, ‘My boy, my boy, why don’t you come over here to Broadcast Hill and see me?’ I called a cab. My buddy and I snuck out of the hotel and went to WBAP” – a 50,000-watt, clear channel cathedral in Country music heaven. 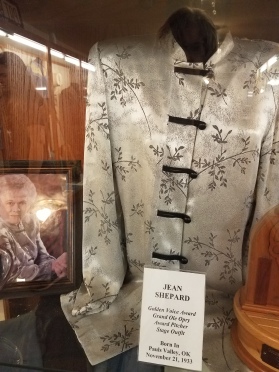 The museum’s extensive collection includes stage apparel worn by Country music giant Jean  Shepard. Jean was just getting started when she met Jewell at the Louisiana Hayride in the early ’50s. Among Jewell’s work for Jean was the hit, “Tomorrow I’ll Be Gone.”

At the station’s door, Pitcox said, “I rang the buzzer, Bill opened the door and I sat in with him that night,” broadcasting on WBAP’s signal that could be heard from Canada to Mexico and across the United States. It was a dream come true. “Bill was just as kind to me as he could be.”
But big trouble was bearing down on Fort Worth – “stock show” weather. The legendary event is held from mid-January to early February and is notorious for coinciding with ice storms and bone-chilling wintry conditions. An Arctic blast blew into Fort Worth while Pitcox reveled in his four hours on air with Bill Mack.
“About 5 in the morning, I started calling for a cab to get back to the hotel,” Pitcox said. Serious consequences were at stake. “We were not allowed to leave our room. We’d have been expelled from school” for slipping away to WBAP. “But I took the chance, because I wasn’t going to miss Bill Mack’s invitation.”
His gamble would pay off for years to come. But he had to run a gut-wrenching gamut first.
“I called all the cab companies, and no one would come” to Broadcast Hill, a high point east of downtown Fort Worth and south of I-30, because the storm had coated roads with ice. Perilous early-morning conditions had brought traffic to a standstill. 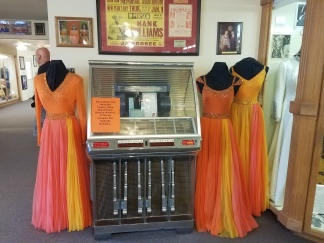 Exhibits include the jukebox that graced superstar Barbara Mandrell’s home and stage apparel worn by the Mandrell  Sisters who starred in the 1980-82 hit TV series .

“I was scared to death,” Pitcox recalled. “Stupid kid, snuck out of the hotel. I knew what could happen to me.” So did Bill Mack, who simply keyed his mic and said to the world: “My friend, Tracy Pitcox, has been visiting with me here tonight, and he needs to get a cab back to his hotel. If there are any of my cab-driving buddies out there that can come pick him up, I’d appreciate it.”
“He had six lines on his phone,” Pitcox said. “All six lit up with cab drivers willing to come pick me up.”
The cab driver who arrived was like an angel, but “it was horrible driving back to the hotel. I got out and said to the cab driver, ‘What do I owe you?’”
“’You don’t owe me anything,’” he said.
“’What? I want to pay you.’”
“’No,’ he said. ‘You don’t understand. I’m doing this for my friend, Bill Mack.’
“I said, ‘How long have you known Bill?’”
“He said, ‘I’ve never met Bill. But Bill Mack’s my friend. I listen to him every night.’”
Learning that such a powerful and personal relationship could exist between a listener/fan and a beloved broadcaster jolted young Pitcox. “I thought that was so profound. I decided I not only wanted a little side job as a disc jockey, but I wanted to make it a career.”
Pitcox took that path and has worked hard to help Country music make a good difference in the lives of fans and artists.
His entrepreneurial spirit has grown him into far more than a disc jockey.
In short, he’s the voice for KNEL throughout the Heart of Texas and the northwest Hill Country. His weekly on-air interviews with leading recording artists have built a huge following. He’s also the founding force for the museum in Brady and the Heart of Texas Country Music Festival.
Pitcox owns Heart of Texas Records, Heart of Texas Recording Studio and Pitcox Rental and Storage Buildings. And he has built a vast network of friends and colleagues among the stars based in Nashville and Branson, Missouri, and local artists who share his passion for traditional County music.
Along the way, Pitcox has been honored with numerous awards and other recognitions.
“One thing has led to another,” he said, smiling. All he needed was the spark from that Fort Worth cabbie.